The airfreight spot market from Europe to South Korea and Japan has soared in the past week, its market share up more than 60% and rates up more than 50%.

To Japan, rises were similar, with rates up 50% and spot market share up 20 percentage points, to 60%, according to new data from Xeneta subsidiary Clive Data Services. 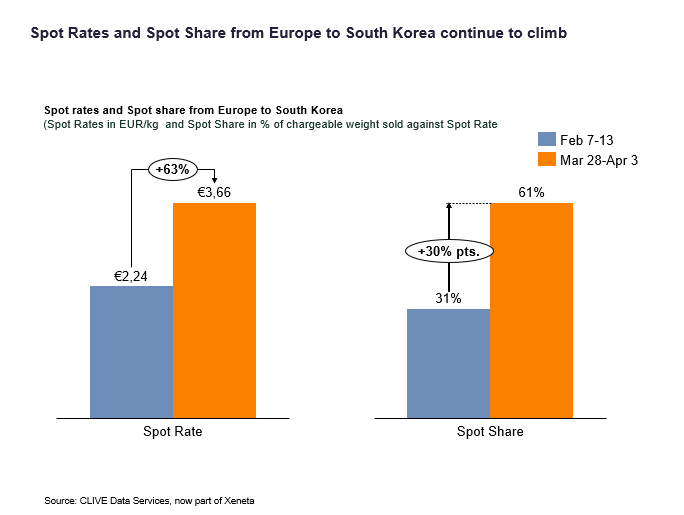 “Airlines want to negotiate rates on a more short-term basis than previously. They had allocated fixed prices, but now want to move to a daily or weekly rate because of the uncertainty and shortage of capacity.

“It says something about the volatility of the market.”

North-east Asia to Europe is less impacted. Spot rates in early February, were €6.50 from South Korea to Europe and €7.30 from Japan, while the spot rate share of the market was 31% and 49% respectively. Now, from South Korea, the spot share is unchanged, while from Japan it has risen to 60%.

“There is an increase from Europe – but not so much on the return side,” said Mr van de Wouw. “Rates on that lane were already twice as high, so there may have been less room for them to rise much more.”

Globally, rates have remained steady in the past week, but remain some 27% higher than pre-Covid.

However, investors are starting to scare. Atlas Air shares fell 15% yesterday, on the back of a bearish note from Wolfe Research. Investor platform Motley Fool noted: “The markets are growing increasingly concerned there could be a recession, causing freight volumes to fall for an extended period.”